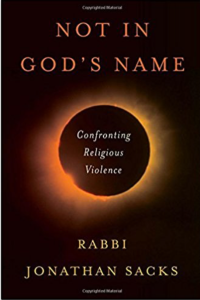 Weapons win wars, but it takes ideas to win the peace.

Recall that even the liberal-minded John Locke in the seventeenth century argued against granting civil rights to atheists: ‘Those are not at all to be tolerated who deny the being of a God. Promises, covenants, and oaths, which are the bonds of human society, can have no hold on an atheist. The taking away of God, though but even in thought, dissolves all.’ This is not to endorse these sentiments, merely to note that they exist.

Much has been said and written in recent years about the connection between religion and violence. Three answers have emerged. The first: Religion is the major source of violence. Therefore, if we seek a more peaceful world we should abolish religion. The second: Religion is not a source of violence. People are made violent, as Hobbes said, by fear, glory and the ‘perpetual and restless desire for power after power that ceaseth only in death’. Religion has nothing to do with it. It may be used by manipulative leaders to motivate people to wage wars precisely because it inspires people to heroic acts of self-sacrifice, but religion itself teaches us to love and forgive, not to hate and fight. The third answer is: Their religion, yes; our religion, no. We are for peace. They are for war.

The contemporary West is the most individualistic era of all time. Its central values are in ethics, autonomy; in politics, individual rights; in culture, postmodernism; and in religion, ‘spirituality’. Its idol is the self, its icon the ‘selfie’, and its operating systems the free market and the post-ideological, managerial liberal democratic state. In place of national identities we have global cosmopolitanism. In place of communities we have flash-mobs. We are no longer pilgrims but tourists. We no longer know who we are or why.

Now is the time for Jews, Christians and Muslims to say what they failed to say in the past: We are all children of Abraham. And whether we are Isaac or Ishmael, Jacob or Esau, Leah or Rachel, Joseph or his brothers, we are precious in the sight of God. We are blessed. And to be blessed, no one has to be cursed. God’s love does not work that way. Today God is calling us, Jew, Christian and Muslim, to let go of hate and the preaching of hate, and live at last as brothers and sisters, true to our faith and a blessing to others regardless of their faith, honouring God’s name by honouring his image, humankind.

What the secularists forgot is that Homo sapiens is the meaning-seeking animal. If there is one thing the great institutions of the modern world do not do, it is to provide meaning. Science tells us how but not why. Technology gives us power but cannot guide us as to how to use that power. The market gives us choices but leaves us uninstructed as to how to make those choices. The liberal democratic state gives us freedom to live as we choose but on principle refuses to guide us as to how to choose.

A humanitarian as opposed to a group ethic requires the most difficult of all imaginative exercises: role reversal – putting yourself in the place of those you despise, or pity, or simply do not understand.

Only in fiction are the great evils committed by caricatures of malevolence: Darth Vader, Lord Voldemort, Sauron or the Joker. In real history the great evils are committed by people seeking to restore a romanticised golden age, willing to sacrifice their lives and the lives of others in what they regard as a great and even holy cause. In some cases they see themselves as ‘doing God’s work’. They ‘seem happy’. That is how dreams of utopia turn into nightmares of hell.

Defining yourself as a victim is ultimately a diminution of what makes us human. It teaches us to see ourselves as objects, not subjects.

It was a great sage of Islam, ibn Khaldun (1332–1406), who saw that as a society becomes affluent it becomes more individualistic. It loses what he called its asabiyah, its social cohesion. It then becomes prey to the ‘desert dwellers’, those who shun the luxuries of the city and are prepared for self-sacrifice in war.

The Hebrew Bible is the supreme example of that rarest of phenomena, a national literature of self-criticism. Other ancient civilizations recorded their victories. The Israelites recorded their failures. It is what the Mosaic and prophetic books are about.

As part of the logic of human sociality, the internal cohesion of a group is in direct proportion to the degree of threat it perceives from the outside. It follows that anyone who wants to unite a nation, especially one that has been deeply fractured, must demonize an adversary or, if necessary, invent an enemy. For the Turks it was the Armenians. For the Serbs it was the Muslims. For Stalin it was the bourgeoisie or the counter-revolutionaries. For Pol Pot it was the capitalists and intellectuals. For Hitler it was Christian Europe’s eternal Other, the Jews.

Until our global institutions take a stand against the teaching and preaching of hate, all their efforts of diplomacy and military intervention will fail. Ultimately the responsibility is ours. Tomorrow’s world is born in what we teach our children today.

Our inclination to act well towards others, whatever its source, tends to be confined to those with whom we share a common identity. The Greeks, the world’s first philosophers and scientists, regarded anyone who was not Greek as a barbarian – a word derived from the sound of a sheep bleating. Our radius of moral concern has limits. The group may be small or large, but in practice as opposed to theory, we tend to see those not like us as less than fully human.

Throughout the contemporary world, the more religious the group the higher its birth rate, and we see the power of religion to sustain community over time.

Although we looked hard at all the available data and case studies back to early Greece and India, we still have not been able to identify a single case of any non-religious population retaining more than two births per woman for just a century. Wherever religious communities dissolved, demographic decline followed suit.

In the course of the nineteenth and twentieth centuries, three substitutes for religion emerged as the basis for new identities. One was the nation state. A second was the ideological system. The third was race. The first led to two world wars, the second to Stalin’s Russia, the Gulag and the KGB, and the third to the Holocaust. The cost of these three substitutes for religion was in excess of a hundred million lives.

Religion in the form of polytheism entered the world as the vindication of power. Not only was there no separation of church and state; religion was the transcendental justification of the state. Why was there hierarchy on earth? Because there was hierarchy in heaven. Just as the sun ruled the sky, so the pharaoh, king or emperor ruled the land. When some oppressed others, the few ruled the many, and whole populations were turned into slaves, this was – so it was said – to defend the sacred order written into the fabric of reality itself. Without it, there would be chaos. Polytheism was the cosmological vindication of the hierarchical society. Its monumental buildings, the ziggurats of Babylon and pyramids of Egypt, broad at the base, narrow at the top, were hierarchy’s visible symbols. Religion was the robe of sanctity worn to mask the naked pursuit of power.

Abraham himself, the man revered by 2.4 billion Christians, 1.6 billion Muslims and 13 million Jews, ruled no empire, commanded no army, conquered no territory, performed no miracles and delivered no prophecies. Though he lived differently from his neighbours, he fought for them and prayed for them in some of the most audacious language ever uttered by a human to God – ‘Shall the Judge of all the earth not do justice?’ (Gen. 18:25) He sought to be true to his faith and a blessing to others regardless of their faith.

A creed that tells us that we are no more than selfish genes, with nothing in principle to separate us from the animals, in a society whose strongest motivators are money and success, in a universe that came into existence for no reason whatsoever and for no reason will one day cease to be, will never speak as strongly to the human spirit as one that tells us we are in the image and likeness of God in a universe he created in love.

Who am I? Why am I here? How then shall I live? These are questions to which the answer is prescriptive not descriptive, substantive not procedural. The result is that the twenty-first century has left us with a maximum of choice and a minimum of meaning.

A humanitarian as opposed to a group ethic requires the most difficult of all imaginative exercises: role reversal – putting yourself in the place of those you despise, or pity, or simply do not understand.

Dualism, as we have noted, comes in many forms: between mind and body, in-group and out-group, and between the higher and lower instincts between which we must constantly choose. It may be that binary opposition is one of the fundamental ways in which we understand the world. But divide humanity into absolute categories of good and evil, in which all the good is on one side and all the evil on the other, and you will see your own side as good, the other as evil. Evil seeks to destroy the good. Therefore your enemies are trying to destroy you. If there is no obvious evidence that they are, this is a sign that they are working in secret. If they deny it, this is proof that the accusation is true, else why would they bother to deny it? And since they are evil and we are good, they are the cause of our present misfortunes and we must eliminate them so that the good to which we are entitled, the honour we once had and the superiority that is our right can be ours again. That is the pathological dualism that leads to altruistic evil with murderous consequences.